The Solitary Wasp Trypoxylon albitarse (Hymenoptera, Sphecidae) is Now in

Three solitary wasp species are conspicuous in Trinidad on account of their free-standing mud nests, usually on buildings or other human-made structures. Zeta argillaceum (Olivier) (Vespidae), Sceliphron fistularium (Dahlbom) (Sphecidae) and Trypoxylon albitarse Fabr. (Crabronidae) are slim wasps of similar size (body length 17-24 mm). The first provisions its nests with caterpillars, while the others provision with spiders. Their nests can persist for years when under shelter and are all so distinctive that they can usually be recognised at a glance (Fig. 1).

Fig. 1. Nests of three mud-nesting solitary wasps. a. Zeta argillaceum, Trinidad. Note emergence hole made by adult offspring in the side of the lower cell. b. Sceliphron fistularium, Trinidad. Note drip tip at the bottom, which presumably functions to drain rain water from the nest surface. c. Trypoxylon albitarse, Tobago. Scale bars = 1 cm.

In contrast to their abundance in Trinidad, none of the three species is recorded from nearby Tobago (Starr and Hook 2003, Hook and Starr 2006), despite focused search for the nests in suitable sites (Starr et al. 2015).

In September 2016 one of us (CKS) found several old nests and one active nest of T. albitarse in a roadside shed about two kilometers north of Roxborough, Tobago. A follow-up survey by RB in February 2017 revealed nests in the same locality and five others. Four of these latter were in the same general vicinity as the first, up to about two kilometers north of it. The last was about five kilometers yet further north, within about a kilometer of the island’s north coast. Two of the sites were under concrete bridges, the other four on buildings. Present indications, then, are that Tobago is now home to at least one diffuse population of T. albitarse. As evidenced by the many emergence holes of adult offspring (Fig. 2), the population appears to be flourishing. 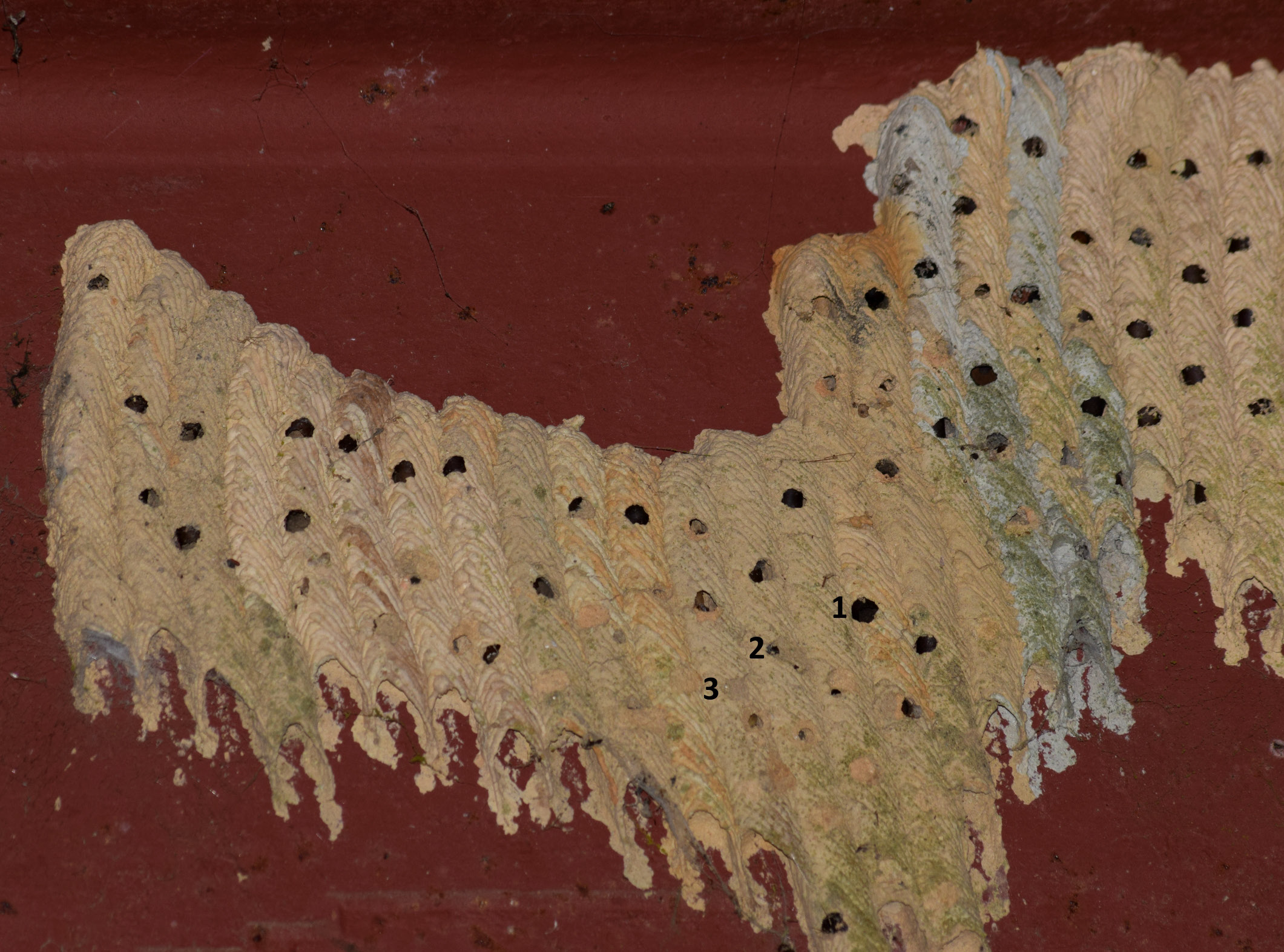 These nests are in rather puzzling sites. If the population was founded by a mated female flown or blown over from Trinidad, it would be expected toward the southwest end of the island or in the windward coastal zone, yet all localities are about 30 km from the nearest point to Trinidad and at least two km from the windward coast. No locality is in a place that seems likely to receive immigrants flying off of ships from Trinidad or elsewhere.

If T. albitarse continues to do well, we can expect it to disperse very gradually to other parts of Tobago, followed by rapid spread when it is established in an area with many human-made structures.

Starr, C.K. and Hook, A.W. 2003. The aculeate Hymenoptera of Trinidad, West Indies. Occasional Papers of the Department of Life Sciences, University of the West Indies (12):1-31.