A Synopsis of Rodent Species in the Caribbean Islands, Endemic and Invasive

Rodents form an important part of an ecosystem. Introduced rats and mice can have devastating consequences on indigenous rodent populations via inter-specific competition; competition for food and spread of disease. It is incumbent upon the Caribbean authorities, therefore, to actively prevent new species from becoming established by providing funding for interdiction efforts, research before an invasive species becomes widespread, and restricting the movements of species. The colonization of the Caribbean by South American mammals between the Palaeocene and the Middle Mio[1]cene included hystricognath rodents. A rodent nearly the size of the American black bear inhabited the small islands of Anguilla and St. Martin until it was apparently hunted to extinction by natives. Hutias (Geocapromys spp.), large rodents that resemble South American agoutis, proliferated into a variety of species on the large islands of the Greater Antilles. There are two endemic rodent families: Solenodontidae and Capromyidae. The family Solenodontidae includes two surviving species, the Cuban solenodon (Solenodon cubanus, EN), and Hispaniolan solenodon (S. paradoxus, EN), which are rare giant shrews threatened by human exploitation and invasive species, including mongooses, feral cats, rats and dogs. Invasive species include the Norway (Brown) Rat (Rattus norvegicus), the House Mouse (Mus musculus) and the Black/Roof/Ship/House Rat (Rattus rattus). Invasive predators have devastating consequences on endemic species, often as a consequence of successful reproductive rates, short generation times, a generalised diet, smallish in stature and secretive. Live collections of rodents should be housed in the zoo in Port of Spain, Trinidad for educational purposes. It is most unfortunate that the museum at the Department of Life Sciences at UWI does not have in its collection sufficient taxidermied rodent specimens, or enough literature on them. Eradication of nuisance predators like cats and mongooses in order to protect endemic rodent species should incorporate effective quarantine programmes, and enforcing policies prohibiting the presence of potentially invasive pets should be a major component of conservation plans in insular envi[1]ronments such as those found on small islands. 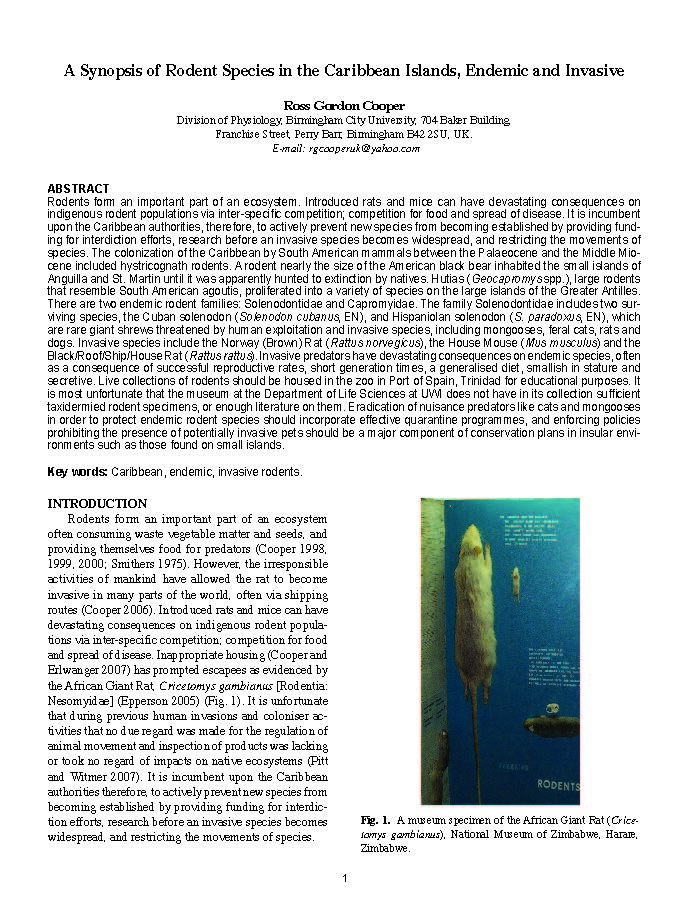